I have just completed a small Kutchwork sampler in shades of red and pink for my Kutchwork summer class. I have stitched a mirror in the center.

I have not decided whether to use a delicate tatted lace as edging to compliment the bright filled in motifs or a crochet lace worked in pearl cotton.

Update: I decided on a crochet lace because it was quicker. 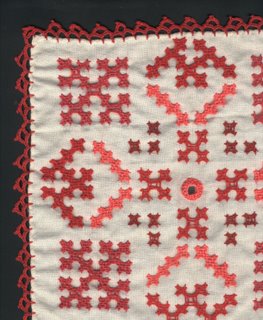 In India, with her rich and varied culture and traditions – craft flourished thanks to royal patronage. Embroidery in the different regions of India, is as rich, distinctive, varied and colourful as the people inhabiting them.

The embroidery of Kutch and its neighbouring Saurashta is probably the most colourful and eye-catching. It flourished in the late 19th and 20th centuries. It employs simple stitches like the herringbone, buttonhole, chain and open chain stitches. The interlacing stitch (looping around the double herringbone stitch) and the Maltese Cross stitch are predominant. The work is embellished with mirrors and sometimes even shells.

Geometric motifs are built using the Maltese Cross and Interlacing stitch. A truly amazing combination patterns are churned out using just these. Once the basic “overs” and “unders” of the interlacing are mastered, even a beginner can execute a seemingly complicated pattern, with relative ease.

Now, here is the interesting part – The Maltese cross and the Interlacing stitch are also predominantly used in Armenian Embroidery.There are very clear instructions for drawing the motifs and interlacing in their website.

Armenia, is a small pocket north east of Turkey.

Some researchers believe that the interlacing stitch was brought to the Kutch region by Arab traders – that the stitches were characteristic of traditional Sindhi embroidery (Kutchwork) practiced widely by immigrants from Sind and Baluchistan (western Pakistan).

Maybe the stitches originated in the Arab nations of Iraq and Iran, spread upwards to Armenia and downwards to the Sind region and to Kutch region in India.

This is a Sofa-back I embroidered using the interlacing stitch, the Maltese Cross stitch, satin stitch and stem stitch. 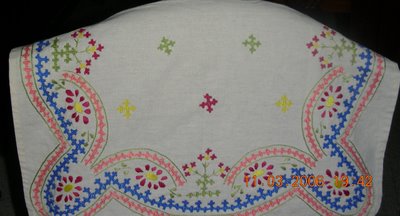 Posted by Bhavani Harikrishnan at 9:40 AM

Email ThisBlogThis!Share to TwitterShare to FacebookShare to Pinterest
Labels: Introduction to Kutchwork

Excellant tutorial.
Can you give me steps to make kutchi work in circles and curves?

Thank u very much!!!
i was looking for such a tutorial from many days.really i appreciate the efforts u have put in creating this tutorial.hats off!!!

Anonymous said...
This comment has been removed by a blog administrator.
11:31 AM

Hi this is a great work for any begibber. I would appreciate very much if you could post some of your works and design. Would be great if you can a tutorial on brazilian embroidery too.

Thanks Nice tutorial! Could you please teach us ari work?

Great Work.. i have been looking for something like this for ages.. wonderful. keep it up.

Where is the tutorial. Would appreciate it if you could put it up here.

Great tutorial...I did not even know this stitch is called Kutch embroidery...I was searching for the same for a long time. Thank you so much.

Thanks to your efforts.If you can help me turning around the corners and curves......

This is beautiful. My mother had forgotten how to do Kutch embroidery and wanted me to find her a tutorial online. Then your blog appears like an answer to my prayers :)
Thank you

thanks , it seriously hav some good info about kutch <, thanks n tc

hello!!!!
i appreciate your work and efforts...
thanku u so much,, u explained all the steps so well that its very easy to learn this emb.
shruti

Hi,
Bhavani ji. Thanx a lot. Actually i had forgotten to do kutch embroidery and i have a saree to do with kutch work. But its design is little different from yours. It is similar to the one in lesson 2 part 2. The only difference is that for me it is open from corners and closed at middle. could you please help me.
Thanks
Swati Jain

my email id is hari.bhavani@gmail.com. If you could send me a couple of photos of the design, I'll try to help you.

ok mam. i will send u pics of that pattern. thanx a lot